News, views and ideas from the kitchen and the quayside. 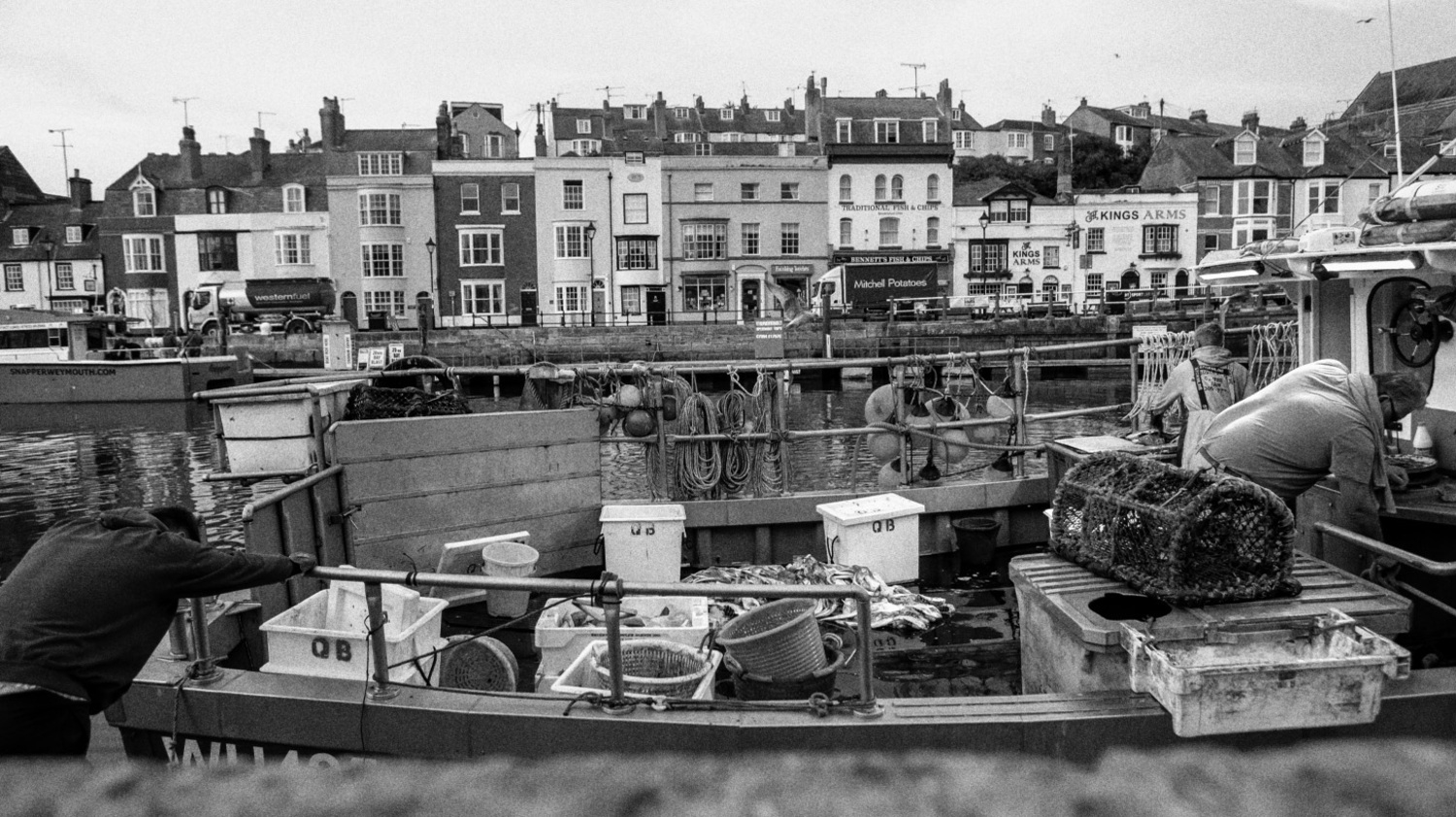 The fishing industry has been central to Weymouth's economy for generations. There’s been a port here since the Roman times, and from the Middle Ages the harbour has played host to a busy local fleet. Today, most are small day boats; under-10m, owner-operated, single handed, fishing the inshore waters with lines, pots, and static nets. An incredible source of fresh fish and shellfish for a restaurant like Catch.

This is commercial fishing at its most sustainable. Much of the local area falls under the Marine Conservation Act, and the impact of aggressive, industrialised fishing has been minimised. Together, Weymouth’s 35 inshore boats land around 1,700 tonnes annually, making it the UK’s tenth largest fishing port. And where the expansion of larger ports like Plymouth and Brixham had previously spelt decline, in recent years, a growing concern for where our fish comes and how it’s caught has seen the local fleet bounce back. That includes our own two boats, Weyfish One and Tarka.

The sea near Weymouth is relatively sheltered and nutrients tend to circulate round the bays. Habitats range from lush seagrass meadows and kelp to rocky ledges and steep drop offs, to sand and gravel dunes and erosion beds. This unusually rich mix of environments coupled with food currents from the Channel, sustains a striking variety of life. The clear waters of Lyme and Weymouth Bays, Portland, Lulworth and Shambles Banks are home to over 40 species of fish and shellfish: some seasonal visitors, some year-round.

We’ve put together this list of what makes Weymouth’s local catch.

Weymouth is the heart of UK bass fishing, accounting for 40% of all line caught fish. But catching bass on the line is no mean feat. The fish congregate in the rock formations off Portland Bill and only feed on the large swells of the spring tides. There are certain spots where the sprats coming in from Lyme Bay get held up by the tide - that’s where the big fish are. Bass are fished under strict regulation: from April to January and at a minimum size of 42cm. As all fish are line caught, any that are undersized are returned unharmed within seconds.

Portland brown crab is famous the world over, full of juicy meat and bursting with local flavour. The crabs are caught in pots that take advantage of the animals’ own instincts to trap them. The crab is lured into a cage with bait through strategically placed openings that they can enter but can’t escape through, unless they’re undersized. Local fishermen bait and set the pots on the sea floor, leave them out for a day, then haul them up, complete with their catch. Any younger crabs and egg-carrying females are returned to the sea.

Lobsters thrive in the nutrient rich waters around Portland Bill. The seven distinct tidal streams of the Race not only bring in food, they’ve also helped create a unique underwater world of caves, crevices, ledges and cliffs that these crustacea love. The skill in catching local lobster lies in getting your pots in as close as possible to these submarine formations without losing them to the elements. Tide, wind and current all conspire to snag fishing gear and protect the lobsters, which, along with the know-how of the local lobster fishermen, is part of why they’re such a premium catch.

Plentiful in British waters but for many years out of fashion, today mackerel is rightly recognised as one of the finest fish. There are mackerel right along the Dorset coast all year round, caught on a line by the day boats in Weymouth and Lyme Bays. During the summer months, they become so abundant you can virtually scoop them out of the water. Visit Chesil Beach from June to August and you’ll often see them chasing schools of tiny whitebait, who end up beaching themselves in an attempt to escape. In fact, sometimes the mackerel are so determined they’ll beach themselves too, in hot pursuit.

Weymouth scallops are hand-dived by fishermen like Rob and Guy of Cavalier Diving on the flatter sand bars of Lyme Bay and the Lulworth Banks. The scallop divers fish to depths as low as 100 feet, with a fixed air line, working for up to an hour a dive, scouring the seabed in low visibility for the tell-tale signs of the shellfish buried in the sandy bottom. You can spot them as they nervously slam themselves shut on approach, sending up a plume of sand or silt. Can there be a more sustainable way of fishing?

Brill, a large flat fish, is a member of the turbot family but far less well-known. Dorset Brill is plentiful in local waters from May to September. They’re found mainly over clean sand, camouflaged against the bottom. especially in areas of undulating sandbanks. They’re smart fish. They take up station on the inclines of the bank facing directly into the tide as it flows over the top, bringing food directly to them. Locally, they’re caught by the day boats, like Rampant, Coralie Dawn and Sherpa, in nets in Lyme Bay off Chesil Beach or near Lulworth.

Most Weymouth turbot is caught by rod and line, drift fishing over the Shambles Bank, east of Portland, or in day boat nets in Lyme Bay. Catching them isn’t easy. They’re typically found around gullies, rocky outcrops or patches of rough ground that attract the small crustaceans they feed on. But although smaller turbot will feed during sunlight, the bigger fish remain hidden in the sand during the day and come out to feed once the sun begins to set – making late evening and night the best time to target large fish.

Skate wings don’t just come from skate, but from several members of the ray family, who themselves are actually part of the shark family, including the blonde ray, thornback ray and undulate ray. These species are common in the waters around Weymouth and are sustainably caught on the sandy seabed of Weymouth and Lyme Bays year-round by the local day boat netters like Sherpa, Coralie Dawn and Wild West.

There are plenty of Dover sole in Dorset waters for much of the year but catching them is quite another thing. In April and May they’re targeted in the waters off Lulworth Cove, while from July onwards the fishing heads west to Chesil Beach. Why the gap in June? Dover fishing is interrupted by the annual migration of Portland spider crabs, which come inshore to breed. These crabs, with their very long legs, tend to get tangled into the day nets used for sole, so the fishermen have to wait until the migration is over.

Wild black sea bream, also known as porgy, are year-round residents in local waters, but landed in relatively small numbers. The fish breed in the protected Marine Conservation Zones along the coast between Weymouth and Lulworth. Bream are caught sustainably, by rod and line, outside of the April-May breeding season, around Portland Bill and off Chesil Beach.

Of course, there are occasional surprises too. In recent years, Weymouth boats have come across thresher and porbeagle sharks (a close but harmless relative of the Great White). Gilt head bream, triggerfish and bluefin tuna are more regular visitors. In 2021 a fisherman at Chesil Beach caught a highly venomous lionfish, the first time the creature had ever been caught off the UK coast.

‘Sea to plate’ and ‘field to fork’ at its very best

A wonderfully clear ethos; incredible, ingredient-led food with sustainability at the heart. A mission statement on which it unquestionably delivers… There is no greenwashing here just incredible flavours and a warm reception.

Directly below Catch at the Old Fish Market, and part of the same quayside family of businesses, you'll find Weyfish; for over 30 years Weymouth's traditional harbourside fishmonger.

An idyllic spot near Weymouth's harbour is home to a "simple and clean" fish-focused menu celebrating a catch hauled in just a few feet away.

News from the Old Fish Market, including special events and offers.

By providing any personal data you are consenting to Catch at the Old Fish Market storing and processing that information. For more information please read our Privacy Policy.

We use cookies on this website to improve your experience as well as to measure the effectiveness of our content and campaigns by analysing visitor behaviour. Cookies are small strings of code that are sent to your browser and stored by your mobile device or computer. Our cookies do not collect personal information. To learn more please visit our Privacy Policy.

I'm OK with that No thanks